I think that the most writing that I ever do regarding writing that never make it into my novels is in writing the character back stories. 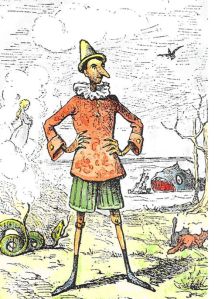 Just as Pinocchio wanted to be a real boy rather than a wooden puppet, your characters also want to be real.

If you remember from my last post, I mentioned that Pinocchio was a wooden puppet who wanted to be a real boy and that characters in stories are asking  the same courtesy.  The real story behind Pinocchio was that he gained the experience of being a boy. He developed a history that explained why it was important to tell the truth. Like a boy he learned that strangers don’t have your best interests at heart and so one. As he went through his adventures, he became fleshed out as it were. He developed a backstory which made him less wooden and more like a real boy. In the same token, our characters want to be fleshed out with backstory as well.

I begin my character’s backstory by giving him/her a birthday. This way, as I am writing my story if I want to discover how old a character is at any specific time in the book all I just have to determine the character’s age in context  by his/her birthday. Sometimes it helps to understand the circumstances of a character’s birth. For instance, when I started writing Soldiers Don’t Cry, I worked on the character backgrounds of Rachel Mayford and her younger sister Elizabeth Thorton. Rachel was quite a bit older than Elizabeth so why was that? Rachel and Elizabeth had different fathers. Why was that? This back story  lead to the creation of Rachel and Elizabeth’s parents which lead to the creation of an earlier episode of the Locket Saga: When God Turned His Head.

What was the character’s birth like? In A Coward’s Solace, James McCray had a difficult birth. Did this affect his life long term?

Every person is different and the more detailed you can get with the physical characteristics of each character, the more you will get to know their physical attributes. For instance, in one of my future stories in the Locket Saga, one of the boys will be mauled by a bear. In subsequent books, when he is mentioned, he will have to live with the scars of that incident both physical and emotional.

What Makes Your Character Tick?

Does your character have any unusual ticks or tags that he uses again and again? In When God Turned His Head, a minor character had a habit of smoking a pipe everywhere he went.

What does your character remember about significant or historical events before the beginning of the story? How did that affect them? Personally I remember when Kennedy was shot. I was four years old and sitting in front of the television eating a bowl of cereal when it was announced.

I also remember when my brother Tom was born a year earlier. I remember that Aunt Mary was cleaning windows when we awoke that morning to learn that Mom went into the hospital “to get our brother”. I remember my brother Allen being dropped off at Uncle Carl’s and my sister Carol and I went to Aunt Mabel’s and we spent Christmas there. I remember waking up Christmas morning and seeing a brand new doll for me under Aunt Mabel’s snowy white Christmas tree. I named the doll Susannah after Susannah of the Mounties played by Shirley Temple.

Include Not so Happy Events

I remember when I was about five or six when we were at my Uncle Warner’s house and mouse was in the house. Family members were trying to scoot the mouse out of the house with a broom. My brother Allen, my cousin Randy and I all climbed up into a chair to avoid the mouse. The mouse in its terror climbed up the back of the chair. I remember seeing its fangs (real or imagined I don’t know. It’s just how I remembered it.).  Allen and I jumped out of the chair and ran to the safety of the couch. The chair went over backwards because Randy moved slower than we did. All three of us were phobic of rodents from then on.

How does your character get along with others? Do they dislike certain people? Why? What exactly makes them dislike this person? Did your character and his/her best friend have a fight that never resolved?

In When God Turned His Head, John Adams defends Drusilla. In Soldiers Don’t Cry Peter Mayford has had a falling out with him because John defended the soldiers involved in the Boston Massacre. In Sailing Under the Black Flag, John Adams has a cameo appearance early in the book and convinces Peter to include his ships in privateering activities during the American Revolution.

Who does he like? Who doesn’t he like? Why? Why not? Is there a story behind his or her reasoning or is it simply a gut reaction this person has about this other person?

Look at each character write down everything you can discover about this person. The more you work on your character’s backstory, the more real this character will seem to you, the more like a real person that character will become. Your character’s backstory may end up being tens of pages long, but that’s okay. Of course, you won’t be putting every detail of this back story into the story line, but don’t worry about not including every detail because it will be there, between the lines.

Get a free e-book copy of Using Diatomaceous Earth Around the House and Yard, when you sign up for my free newsletter