In the Beginning, everything was perfect. God had created everything that was good and man was part of that Good. 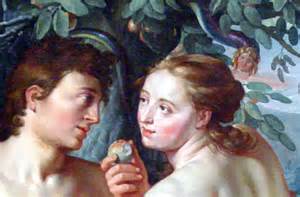 God told mankind that they could eat of any tree in the garden, except for from the Tree of the Knowledge of Good and Evil. The subtle serpent came and tricked Eve into eating of that tree. Because of their disobedience to God’s word, mankind–Adam and Eve were banished from the garden. God put a flaming sword to guard another important tree in the garden called The Tree of Life.  Other consequences of their sin included hard work and pain in childbirth. He made the serpent crawl upon the ground and predicted that though the serpent would bruise his heel, the seed of the woman would crush the serpent’s head.

After a time it seemed as though God rejected humans, but we soon learned that was not the case. If you’ll notice it said that God put the sword to guard the tree so that they would not live forever in their sins. If you will notice, when God entered the garden, he sought out Adam and Eve. They were the ones who separated themselves from their creator.

As I looked more closely at the symbolism offered in the sword, I realized that the sword with its blade and hilt has a shape similar to the cross. The Word is often called the “Sword of the Spirit” and In John chapter one, John refers to Jesus as “The Word”.

Sin cannot remain in the same space that God occupies nor can God be where sin remains. When we allow sin to enter our lives, it ruins our relationship with God. Rebellion can make it seem as though God is far from us, however, all we need to do to get back in right fellowship with God is to allow the Word of God, Jesus Christ to change us so that our sins are forgiven and we can walk in the newness of life that is in Him.

The Word says that in order to be eternally saved, we have to agree that we have sinned, and we must if we want to accept Christ’s work on the cross. He has not rejected you.

Sin makes it seem as though God is far from us, however, just because God seems far from us, does not necessarily always mean that God seems far away because we have sinned. He desires to have a relationship with you, but you must come through Jesus to get to God.. Throughout the next quarter, I will be discussing how other people in the Bible often felt that God was far from them.. By examining these lives, we will learn that there are numerous reasons that God seems to too far away to care about us. In the process, we will learn that God isn’t punishing us for the wrong we have done, instead, he is demonstrating his mercy and grace despite the situations in which we find ourselves in this fallen world.

Donna Brown is pastor at Faith in God Church  1 1/2 miles south of Brandsville, Missouri on Hwy 63. Sunday services are at 10 am and Wednesday night Bible Study at 6:30 pm.   As Author Cygnet Brown, she  has  published a nonfiction book: Simply Vegetable Gardening: Simple Organic Gardening Tips for the Beginning Gardener

.For more information about Cygnet Brown and her books, check out her website at http://www.cygnetbrow.com .