On our last post, we discussed the idea that worry is a negative form of “Tomorrow Thinking”. “Past Thinking” also exists. Some past thinking is healthy. For instance, having pleasant memories are a form of ‘past thinking” that is appropriate. Pleasant memories can create good emotions that energize an otherwise depressing day.

Regret and Shame are negative “Past Thinking”. Regret is a negative emotion about something that we did in the past. Shame is an emotion that causes us to feel bad about who we are.

I had a dream several times that related to this idea of shame. I dreamed that I was in a restaurant with a number of my friends. The mood of the room was fun. Everyone was enjoying themselves. Then a guy came in and he seemed nice at first. He and I struck up a pleasant conversation. The next thing I knew, all of my friends left the room and I was alone with this person. He suddenly started telling me how I wasn’t any good, and that I would never amount to anything. He told me that God couldn’t and wouldn’t use me because of all thing bad things that I had done in my life.

I told him that I rejected what he was saying and I told him to leave. With that, I awoke from my dream. I was pleased with myself for my stand.

No Regrets, No Shame

We all make mistakes. There isn’t a person on this earth who didn’t make a mistake and never has been, except one, and they crucified him for it!

Asking God for forgiveness is the first step, but we have to go beyond that.

We have to forgive ourselves, make appropriate restitutions, and move on. Better than that, we can discover what we learned from that experience. For instance, if we went to jail because we stole a car, we paid the owner for any damage to the vehicle and we learned that crime doesn’t pay. We don’t have to beat ourselves up over the past. Being a car thief is no longer what we are. That is in the past. If I learned from my mistake, I no longer have to feel shame for my mistake either because I am no longer that person. I have grown from the experience.

Sometimes we feel regret and shame for things that happen to us that are not our faults. I have known a couple people who were convicted of crimes they did not commit. They plea-bargained because they could only afford a public defender who was not interested in defending an innocent person in court. One convicted person rather than regretting the situation showed gratitude for the situation. He said that he had time to reflect on his life and to pursue hobbies in jail that he would not have been able to do if he were not in prison. He sees the experience as a positive rather than a negative.

Gratitude is a positive form of past thinking and today thinking. When we feel gratitude, we are remembering and feeling something good about a past event. Feeling this gratitude creates positive energy within us.  For best results, it is important that we express that gratitude. We can express it by telling someone, by recording our voice expressing this gratitude, or by writing it down in a journal. For best results, we need to feel gratitude at the same time that we express it. If you’re feeling low on energy, expressing gratitude can increase your energy as much as a Red Bull does but without the jittery after effects.

Not everything that happens in our lives is necessarily good. My friend who went to prison for a crime he did not commit could have left him bitter and full of regrets. Rather than this bad experience cause him to live in regret and shame, he chose to create a positive experience from it. The experience itself wasn’t positive, but what was positive was how he decided to spin his experience. Gratitude, like regret and shame is a choice. Which one do you choose?

Gratitude, like regret and shame, is a choice. Which would you rather choose?

Book V of the Locket Saga: In the Shadow of the Mill Pond

Now Available in Paperback with 40% discount!  Click here to buy now. Taking Preorders for Kindle Edition until May 6! Order now! 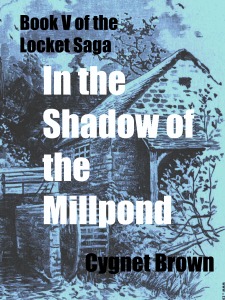 B) In the Shadow of the Millpond by Cygnet Brown

In Book V of the Locket Saga, fifteen-year-old Lacey Mayford has been infatuated with Matthew since she was a little girl. Matthew, a half-breed Indian, doesn’t see her as anything more than a little girl cousin. How can she convince him that she is growing into a beautiful young woman he should consider?

In the frontier town near the turn of the century, Matthew Thorton is blamed for Luther Hannibal’s murder after an altercation with Luther over stolen furs. Lacey defends Matthew with the help of a teacher, Felix Grackle. They look into other suspects who could have killed Luther Hannibal. Matthew’s father Luke and his best friend Jacque Pierre are looking for the person responsible for stealing the furs. They believe the thief might have something to do with Luther Hannibal’s murder.

A vigilante group seeks to avoid the imposed whiskey sales tax. The group goes to extremes; they steal the US mail and tar and feathering U.S. government officials who attempt to collect those taxes.

Will Lacey be able to clear Matthew’s name? Will Luke and Jacque Pierre find the man who stole the furs? Will the vigilantes stop the Whiskey Rebellion without bloodshed? The truth is far more sinister than anyone could imagine.