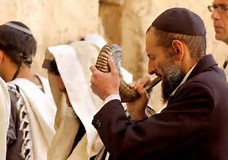 I read the whole Bible through the first time when I was twelve and when I was going through it, I remember coming across Psalm 22 for the first time. It didn’t take me any teacher to show me that it was a prophetic psalm of David that revealed the inner thoughts of Jesus Christ while he hung on the cross two thousand years in the future.

When I was in my late teens I learned about types in the Bible. These types were hints of what was coming in Jesus Christ.

Rosh Hashanah, One of the Seven Jewish Feasts

The Seven Jewish feasts are indicative of the events that are to occur that related to future events as well as memories to be shared. They are in themselves prophetic of past and future events. The first three feasts represent what happened during passion week. The feast of First Fruits or Pentecost occurs at fifty days after the last day of the earlier feasts. This was indicative of the empowering of the church. The last three feasts occur one right after the other and the first of those three feasts is the Feast of Trumpets. These last three feasts last seven days.

The first of these is Rosh Hoshanna. It occurs in 2017 from September 20-23, and is also know as the Feast of Trumpets. During Rosh Hashanah is to blow a primitive trumpet known as a shofar. According to Rabbi Shraga Simmons when blowing the trumpet, there are three distinct sounds.

Rosh Hashana is the day of appreciating who God is. On this day, the Jews internalize that understanding so that it becomes a living, practical part of our everyday reality. God is all-powerful. God is the Creator. God is the Sustainer. God is the Supervisor. In short, God is King of the Universe.

But for many of us, the idea of a “king” conjures up images of a greedy and power-hungry despot who wants to subjugate the masses for his selfish aims.

In Jewish tradition, a king is first and foremost a servant of the people. His only concern is that the people live in happiness and harmony. His decrees and laws are only for the good of the people, not for himself. (see Maimonides, Laws of Kings 2:6)

The object of Rosh Hashanah is to crown God as our King. Tekiah – the long, straight shofar blast – is the sound of the King’s coronation (Malbim – Numbers 10:2). In the Garden of Eden, Adam’s first act was to proclaim God as King.

Today, for Christians, we have a greater covenant promise than the Jews of the Old Testament. We, Christians call Jesus Christ our Lord of Lords and King of Kings. We set our values straight and return to the reality that Jesus Christ is the One Who runs the world… guiding history, moving mountains, and caring for each and every human being individually and personally.

Maimonides adds one important qualification: It isn’t enough that God is MY King alone. If ALL humanity doesn’t recognize God as King, then there is something lacking in my own relationship with God. Part of my love for the Almighty is to help guide all people to an appreciation of Him. Of course this is largely an expression of my deep caring for others. But it also affects my own sense of God’s all-encompassing Kingship.

As a Christian it is my duty, my act of LOVE to my Creator and King to share his love with others around me. Therefore I put up what Maimonides says into a Christian perspective. It isn’t enough that Jesus Christ is MY King alone. If ALL humanity doesn’t recognize Jesus Christ as King, then there is something lacking in my own relationship with Christ. Part of my love for Christ is to help guide all people to an appreciation of Jesus Christ. Of course, this is largely an expression of my deep caring for others, but it aso affects my own sense of Jesus Christ’s all-encompassing Kingship.

When we think about the year gone by, we know deep down that we’ve failed to live up to our full potential. In the coming year, we yearn not to waste that opportunity ever again. The Kabbalists say that Shevarim – three medium, wailing blasts – is the sobbing cry of a Jewish heart – yearning to connect, to grow, to achieve. (Tikunei Zohar – 20-21, 49a)

Every person has the ability to change and be great. This can be accomplished much faster than you ever dreamed of. The key is to pray from the bottom of your heart and ask God for the ability to become great. Don’t let yourself be constrained by the past. You know you have enormous potential.

At the moment the shofar is blown, we cry out to God from the depths of our soul. This is the moment – when our souls stand before the Almighty without any barriers – that we can truly let go.

As a believer in Jesus Christ, I too cry out to him. When I bare my soul to him, I cry out not just for myself, but for others too.

On Rosh Hashana, the Jews wake up and be honest and objective about their lives: Who they are, where they’ve been, and which direction they’re headed. The Teruah sound – 9 quick blasts in short succession – resembles an alarm clock, arousing them from our spiritual slumber. The shofar brings clarity, alertness, and focus. (Malbim – Yoel 2:1)

The Talmud says: “When there’s judgment from below, there’s no need for judgment from above.” What this means is that if we take the time to construct a sincere, realistic model of how we’ve fallen short in the past, and what we expect to change in the future, then God doesn’t need to “wake us up” to what we already know.

God wants us to make an honest effort to maximize the gifts He gave us. You aren’t expected to be anything you’re not. But you can’t hoodwink God, either.

The reason we lose touch and make mistakes is because we don’t take the time every day to reconnect with our deepest desires and essence. The solution is to spend time alone every day, asking: Am I on track? Am I focused? Am I pursuing goals which will make the greatest overall difference in my life and in the world?

The Rabbis tell the Jews to make it a habit to keep in touch with yourself, and when Rosh Hashanah comes around, the alarm clock of the shofar won’t be nearly as jarring!

I believe that this sounding of the Shofar will eventually correlate with the Jewish realization of who Jesus Christ is. I believe that this event also is when the great Harpazo (catching away) occurs, when the true believers are taken.to wait out the judgement and wrath that will occur during the seven years of tribulation. At the same time, the trumpets will show the Jews how much they need not just a savior, but that the Savior has already come. They will recognize who Jesus Christ is, they will repent for their denial of him and desire to bring the whole world to him and finally, they will focus all their attention on the work of bringing souls to Christ. The final outpouring of the spirit will not be from Christian believers, but from Jews who believe that Jesus Christ is their Messiah.