God's Gifts to Us
2 Comments 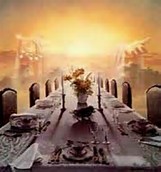 When I originally started thinking about writing this blog post, I knew that I would write it about gratitude because it was to be a Thanksgiving blog. What I didn’t realize is that my gratitude would be tested this year.

About a month ago, my husband was on the road (he’s an over-the-road truck driver) when suddenly he had sharp pains on the right side of his chest. That following Monday he went to his general physician. He complained of the pain and he was also spiking temperatures and having night sweats. The doctor told him that was his gall bladder and he gave the impression that he didn’t think that it was so bad that Jeff would need surgery for it. He had ordered some blood work that showed that all things seemed normal although he did have “a bit of an infection” the doctor never ordered any x-rays or antibiotics for the infection.

My husband did not want to get gall bladder surgery, so he used every alternative medicine he could find to cleanse his gallbladder. He’d say he felt better and go back to work for a run and then he’d feel sick again. From what I gather, he never really felt better. He just got used to being sick. He went to see his work’s physician for his DOT physical. They gave him a clean bill of health.

He was Sicker than Anyone Thought

Finally, last Wednesday, I woke up in the morning and heard a strange sound. It was a rapid rattling noise that I had not heard before. It was Jeff’s breathing! I told him. “There is no way that is a gallbladder issue. There is something else really wrong.” He decided to go to the doctor. I told our daughter to expect the worst. He was going to the doctor and would probably end up in the hospital. She needed to be prepared for that. I had to take her to school and to not depend on her Dad to do it for her.

His doctor was not in that day and would not be in the next day either so the staff at his practice told him that he would have to go to urgent care. I was teaching my first class of the day when he texted me that he was being admitted to Cox South for pneumonia.

When I got to the hospital that evening, I found out how bad his situation really was. He was going into surgery the next morning to get tubes put in his lungs. He was on three antibiotics. The surgeon thought he would be in the hospital for five to six days. b

From Bad to Worse

The next day, Thursday, I went to work and his mother sat with him as he waited for his surgery. The doctor had said that his surgery would last two hours. It lasted over three hours. When the doctor called us in, he didn’t give us much hope that he would recover quickly or that he would recover at all. He wasn’t even certain that Jeff was coming off the breathing tube they used in surgery. He had said that they drained one and a half liters of fluid off of his lungs. He said that he was very sick.

My daughter and I went to see him after he went to CVICU that night. His body was cold and clammy. He was pale and still. He was covered in tubes and wires and he really looked bad. The nurse was having difficulty getting his pulse and respirations under control.

In one sense, I was extremely angry with the doctors that had seen him during the month prior to his admission to the hospital. His surgeon said that he had been sick for a very long time and yet those doctors had not picked up the diminished lung sounds when they were supposed to have put their stethoscopes to his chest.  When the doctor saw that he had an infection, he didn’t give him any sort of antibiotics. No one even did an x-ray to rule out pneumonia.

I also felt fear. I was afraid. One of the things that went through my mind was that it was during Thanksgiving week that my eldest brother (a year younger than I) had become sick and then died that Saturday after the holiday. My husband born just a couple of months before than he was.  I was afraid I might end up facing the same situation with my husband. I went home that night and knew that I needed to take the day off because I might have to face making decisions. It wouldn’t be fair to my students if I had to leave in the middle of class.

The next morning, about nine hours later, after my daughter gave blood at her school, she and I went to the hospital to see him again. Things had changed dramatically. Though he was obviously on pain medications, he was alert and knew what was going on. The breathing tube had\ been removed. He was able to talk to us. Everyone was amazed by how fast he came around.

We stayed until visiting ours were over and went home, took naps ourselves and returned that evening. He was even doing better. He had a full liquid lunch and then had eaten a regular dinner. He had even walked while we were gone. Barring a major set back, the nurse agreed with me that it was not unreasonable to think that he would probably be going home by Thanksgiving. I saw the surgeon on Saturday night and he told Jeff that he was amazed at how well he was doing after what he saw during surgery. It was, in my opinion, a miracle. ,What a relief!

Previous plans changed. My husband\ and daughter were planning to go to visit her sister’s family in Colorado over the holiday. That obvious wasn’t going to happen. However, my son and his girlfriend from Washington, DC had also planned to visit me during that same holiday. They are still coming and my husband\ and daughter will be part of that too, so it will still be a good day. All the more reason to be grateful.