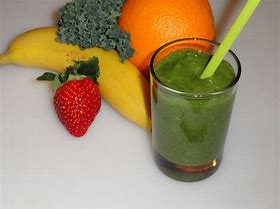 Summer is the time of year that we want to kick back and enjoy those lazy crazy days. In August and the heat of summer, who wants to eat a hot breakfast when its so hot outside not to mention cook one? A person could eat cold cereal and milk. However, I don’t know about you, but I have found that cold cereal doesn’t hold me over until lunch.

In addition, most food that we eat at breakfast isn’t always that nutritious. Most breakfast cereals are loaded with too much sugar and salt. That’s why I love this summer cool smoothie that I make.

One cup of Kale or spinach

Kale is low in saturated fat, and very low in cholesterol. It is also a good source of dietary fiber, protein, Thiamin, Riboflavin, Folate, iron, magnesium and phosphorus, and a very good source of Vitamin A, Vitamin K, Calcium, Potassium, Copper and Manganese.
Kale boosts your intake of water-soluble vitamins. It also contains Vitamin C and a range of B vitamins, including vitamin B-1, riboflavin, niacin, folic acid and vitamins B-5 and B-6. These nutrients support your metabolism and help maintain healthy skin and hair.
I can tell you that I can see a huge improvement in my own skin and hair. My skin appears to be clearer and softer. My hair is shiny and healthy.
At just 34 calories per cup, kale is an undeniable superfood.

Though spinach is not the powerhouse that Kale is, I like to use it as a change of pace from Kale. This food is low in Saturated Fat, and very low in Cholesterol. It is also a good source of Dietary Fiber, Protein, Thiamin, Riboflavin, Folate, Iron, Magnesium and Phosphorus, and a very good source of Vitamin A, Vitamin C, Vitamin K, Vitamin B6, Calcium, Potassium, Copper and Manganese. One advantage that spinach has over Kale is that it has a glycemic index of 0 compared to Kale’s 3. (Lower numbers are better than the higher ones.

Frozen Fruit-1 cup- blueberries, strawberries, cherries, kiwi, peaches, mango, blackberries, raspberries, or pineapple or any combination of the above

Blueberries are very low in Saturated Fat, Cholesterol and Sodium. It is also a good source of Dietary Fiber, and a very good source of Vitamin C, Vitamin K and Manganese. Adding other foods with complementary amino acid profiles to this food may yield a more complete protein source and improve the quality of some types of restrictive diets.

Blackberries-much like spinach, raisins, apples, plums and grapes, blackberries are rich in bioflavonoids and Vitamin C, but other nutritional benefits include a very low sodium count and having only 62 calories to a cup. The dark blue color ensures blackberries have one of the highest antioxidant levels of all fruits.

Red Raspberries are very high in dietary fiber. Up to 20 percent of their total weight is made up of fiber. They’re also a good source of vitamin C, B vitamins, folic acid, manganese, copper, magnesium and iron. The high polyphenol content in raspberries may also reduce the risk of cardiovascular disease by preventing platelet buildup and reducing blood pressure via anti-inflammatory mechanisms.

Strawberries are very low in Saturated Fat, Cholesterol and Sodium. It is also a good source of Folate and Potassium, and a very good source of Dietary Fiber, Vitamin C and Manganese.

Cherries One cup of cherries is less than 90 calories. That same cup of cherries has 3 grams of fiber, which aids in digestion, lowers cholesterol, controls blood sugar and can help with weight loss. Cherries are a good source of vitamin C, with 16% of the daily recommended value in one cup.

Kiwi is very low in Saturated Fat, Cholesterol and Sodium. It is also a good source of Dietary Fiber, Vitamin E (Alpha Tocopherol), Potassium and Copper, and a very good source of Vitamin C and Vitamin K.

Peaches has 50 calories, 15 grams of carbohydrate, 0.5 grams of fat, 13 grams of sugar, 1 gram of protein, and 2 grams of fiber. The peach is an exceptional source of vitamin C, a necessary antioxidant that can eradicate free radicals.

Mango has a unique, delightful taste and is one of the most nutritious fruits. One cup of mango provides nearly 25% of the recommended daily intake of vitamin C, two thirds of daily allowance for vitamin A, and good amounts of vitamin B6, vitamin E, pectin, phosphorus, potassium, and magnesium.

One Banana and Half a Cup of Frozen Pineapple

Pineapple is very low in Saturated Fat, Cholesterol and Sodium. It is also a good source of Dietary Fiber, Thiamin, Vitamin B6 and Copper, and a very good source of Vitamin C and Manganese.

Pineapple contains Bromelain. Bromelain is a complex mixture of substances that can be extracted from the stem and core fruit of the pineapple. Among dozens of components known to exist in this crude extract, the best studied components are a group of protein-digesting enzymes (called cysteine proteinases). Originally, researchers believed that these enzymes provided the key health benefits found in bromelain, a popular dietary supplement containing these pineapple extracts. In addition, researchers believed that these benefits were primarily limited to help with digestion in the intestinal tract. However, further studies have shown that bromelain has a wide variety of health benefits, and that many of these benefits may not be related to the different enzymes found in this extract. Excessive inflammation, excessive coagulation of the blood, and certain types of tumor growth may all be reduced by therapeutic doses of bromelain when taken as a dietary supplement. Studies are not available, however, to show these same potential benefits in relationship to normal intake of pineapple within a normal meal plan. The fruit shows some unique health-supportive properties, including possible digestion-related and anti-inflammatory benefits.
A banana is very low in Saturated Fat, Cholesterol and Sodium. It is also a good source of Dietary Fiber, Vitamin C, Potassium and Manganese, and a very good source of Vitamin B6. It also produces a creamy texture that imitates cream.

Finally I use a combination of soymilk, coconut milk and almond milk which liquefy the smoothie and add nutrition of their own.
Soy milk is rich in protein, and fortified with some of the same micronutrients found in cow’s milk — such as calcium, vitamin D, riboflavin, phosphorous, vitamin A, and vitamin B-12. One cup of soy milk generally provides about 8 grams of protein, the same amount found in a cup of low-fat cow’s milk. Soy milk is a nutritious substitute that doesn’t have lactose and shouldn’t cause any negative side effects found in cow’s milk.
While numerous possible health benefits exist for drinking soy milk, some studies show potential concerns. A review published in 2014 in Alternative Therapies in Health and Medicine reports that some studies show soy might negatively impact fertility in men, while other studies show no effects. Some studies show soy increases thyroid hormone activity, while other studies found that soy decreases thyroid function. Lastly, milk protein appears to be more effective than soy protein at increasing lean muscle mass in athletes. For my purposes, however, soy seems to be a good fit, because it also contains phytoestrogen which is great for woman who is post-menopausal.

Coconut milk adds a unique coconut flavor to the smoothie. Coconut milk is highly nutritious and rich in vitamins C, E, B1, B3, B5 and B6 and minerals including iron, selenium, sodium, calcium, magnesium and phosphorous. Unlike cow’s milk, coconut milk is lactose free so can be used as a milk substitute by those with lactose intolerance. It is a popular choice with vegans and makes a great base for smoothies, milkshakes or as a dairy alternative in baking.

There you have it, my morning smoothie. I figure that this nutrition packed drink contains a total of about 300 calories that provides more than half of my daily nutritional needs of vitamins and minerals as well as about one third of my protein needs for the day.