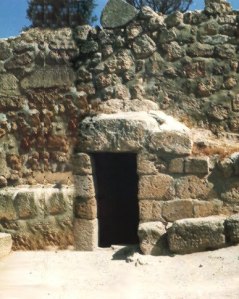 The name “Mary either in its Hebrew form (Miriam)  or Greek form (Marie) was a common name throughout first century Judea, therefore the different Marys were described in the Bible in relation to where that person was from and in relation to those around her. Mary of Bethany was one of those people. One of the more interesting Marys of the Bible is a woman that I will refer to as Mary–Martha and Lazarus’ sister.

Mary–Lazarus and Martha’s sister is also referred to as Mary of Bethany. Traditionally, Bethany has been identified with the present-day West Bank city of al-Eizariya which means “Place of Lazarus”, This site of the reputed Tomb of Lazarus is located about 1.5 miles east of Jerusalem on the south-eastern slope of the Mount of Olives  Just prior to the final passover in which Jesus was crucified, Jesus and his disciples stayed in Bethany.

In Luke 10:38-42 we first meet Martha and Mary. Martha is  trying to serve Jesus by taking care of her home and serving Jesus meals. Mary, on the other hand, sat listening to Jesus, asking him questions. Martha chastens Mary, but Jesus chastens Martha for not recognizing that Mary has chosen a better way to spend her time.

We see Mary and Martha again later in John chapter 11. At the feast of Hanukkah, religious leaders tried to stone. Jesus escaped across the Jordan River to where John the Baptist baptized. While there, a message came from Martha and Mary saying that their brother Lazarus was very ill. Jesus stayed there an additional two days. It took him an additional two days to get to Bethany. Lazarus had been dead for four days.

When Jesus was about two miles from Bethany, Martha came to meet her, but Mary stayed behind at the house. Martha told him that if he had been there, she knew that Lazarus would have been healed. Jesus told her that if Lazarus believed in him (Jesus) he would live. Martha thought that Jesus was lking about the resurrection at the time of judgment. Jesus had something else in mind. He arrived at the house where Mary fell at his feet begging to know why he let her brother die.

As we all know, Jesus rose Lazarus from the dead. 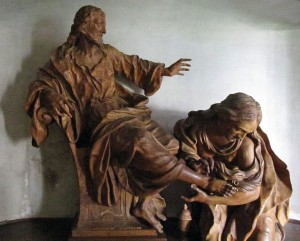 An Epiphany that Is Often Missed

In John Chapter 12, we learn that after Lazarus’s resurrection from the dead, friends and family celebrated the event. However, there is an incident that is mentioned during the feast. Mary comes running into the room and pours spikenard at Jesus feet. She is crying, and dries his feet with her tears.. Spikenard was used for deep physical, emotional, and spiritual pain.  Spikenard is a very spiritual oil and had been used in Egypt and by priests and kings for an anointing oil and to induce meditation. The oil was often used to release us from the need to control and rebel against power and authority. It was a good oil for emotional healing. She knew that Jesus was going to die and she wanted to help ease his pain by anointing his feet in the spikenard.

This was more than a symbolic gesture on Mary’s part. She used the spikenard and was crying because she realized that Jesus was going to die and that he would be in excruciating physical, emotional, and spiritual pain.. She was offering  him relief from that pain. Even the act of putting the spikenard on his feet is significant. Spikenard and other essential oils are absorbed into the body through the skin and absorption is especially good when applied to the feet. A woman’s hair in that culture was her glory. Drying his feet with her hair was evidence of her humility.

My Personal Take Away

Just as Mary of Bethany sat at Jesus feet and listened to what he told her, we too should spend time from our busy lives to listen to what the Lord has to tell all the time. We are often too busy. Often we blame our current society, and that we don’t have the same amount of time that they had back then. However, we have the same twenty-four hours and we don’t have to work as many hours as they did back then, just to provide a roof over our heads and food on the table. We really have no reason except that we do not choose the important things.We need to recognize that he wants to speak to each of us.

Lazarus was not healed right away, but he was raised from the dead. In the end, we need to humble ourselves and serve him because he already has served us with far more than we deserve.This reminds us that we need to recognize that when things do not go as we expect, even though we don’t understand his rational, God has other, better plans.

Finally, I learned that Mary knew more than anyone else in the room concerning what Jesus would be facing in during the next few days. A woman named Mary though it was not his mother, was the first person to know that Jesus would also rise from the dead. This was probably the reason that she was not among the women at the tomb on the day of his resurrection.